There is a very beautiful image that can be used to explain what music from past times actually is. Imagine a message in a bottle, thrown into the sea somewhere hundreds of years ago, that we are only now opening. Ideally the hidden message it contains conveys to us all of the magic and energy that were once placed within it. The interpreter’s artistry is devoted to bringing this to life.

But is it possible? Simply to stride through countries and centuries, singing songs of love as though there were no borders in time and space? And to complement these old songs with new ones of our own, that take their place within a tradition while nevertheless representing the present? Of course it is possible; indeed it is a necessity if we wish to perceive ancient music as relevant to today. Arising at the instant when they are sung and played; understood at the moment when we hear them. This is just what Arianna Savall and Petter Udland Johansen do, and they invite us to join them on their journey.

These two performers and their ensemble pose a question that is as simple as it is transcendental, as topical as it is timeless: what is love like? In their quest for answers they travel through around a dozen countries, among them Spain, Austria, Norway and Switzerland, finally ending up in Chile. They take with them a selection of instruments that is as varied as the music itself: the triple harp, which was actually invented in Italy in Monteverdi’s time, and made its way via France to England, where it was highly regarded not only by King Charles I but also, before long, by Scottish and Irish folk musicians; the cittern, a plucked instrument that was even played by the Reformer Martin Luther; and the Hardanger fiddle, the most important instrument in Norwegian folk music, which features sympathetic strings in addition to its four bowed strings.

The journey begins with a dialogue from the Spanish Renaissance, the Romance of young Rose, who utters one of the uncomfortable truths about love: she trusts him, believes that he will marry her, but in fact he already has a wife and child. When the truth emerges, he lies and denies everything. By contrast Yo me soy la morenica from the famous ‘Cancionero de Palacio’, the song collection from the legendary court of King Ferdinand and Isabella, is a variant of the ‘Nigra sum’ from the Song of Solomon; to this day we are unsure as to whether the text originally described erotic, sensual love or metaphorically represented the ecstatic union of man and God. No such questions are raised by La tarara; it is very clear what the girl in the green dress is promising the young man picking olives… The Catalan ballad La Dama d’Aragó presents another problem: what if the lovers are brother and sister, and the brother must take his beloved to the man whom she is to marry?

We can give some thought to this matter while the Galician dance Cancro Cru takes us through the mists and across the sea to Italy. Si dolce e’l tormento is one of the most famous solo madrigals by Claudio Monteverdi. It describes the absurdity of love that each of us must surely have felt: the contradiction that pain is caused by beauty – at least, if we feel rejected, like the singer of this song. Fortunately things are far jollier in Switzerland: Girometta, who in this folk song from Ticino comes down from the mountains, surely has more in mind than just playing the flute and dancing with her shepherd friend…

In France we start by sneaking into a mysterious Renaissance rose garden, in which the nightingale intones its seductive song. L’amour de moi tells of a pair of lovers who take their pleasure there by any and, especially, by night. How much more miserable, then, is the plight of the singer in Doulce memoire: this, one of the most famous chansons of the French Renaissance, tells of the sorrow that comes when love fades. Everything that was once beautiful becomes horrible; happiness turns to despair. Next comes a setting by Arianna Savall herself of the poem L’adieu by Guillaume Apollinaire, a brief poem rich in symbolism in which the poet invokes eternal love that lasts beyond death.

Petter U. Johansen interprets Schubert’s famous Heidenröslein (a collaboration between the German poet Goethe and the Austrian composer Franz Schubert) as the shock of a young, inexperienced couple’s first sexual encounter – a very credible approach. And after brief detours to England (I will give my love an apple feasts on the generosity of new love, which can open up hearts and senses like no other) and Norway (in Astrid mi Astrid a couple recognizes too late that they are really intended to be together), our love journey ends in Chile. And it is worth reflecting for a moment about Violeta Parra’s Gracias a la Vida. Thus far we have heard songs of love in all its lust and longing, in all its futility and fulfilment. This Chilean artist, however, who held strong political views, makes no such distinctions. She does not divide, but rather unites. In her song of gratitude to life she includes everything, strength and weakness, sorrow and joy. We want to believe her – especially because we know that shortly after composing this masterpiece, at the age of just 50, she took her own life. Nobody said that love would be easy – not even Arianna Savall, Petter U. Johansen and their ensemble. And therefore we listen all the more keenly. 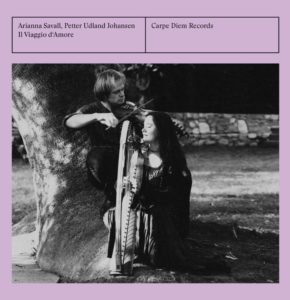 BY THE CD HERE